What colour is a lazy streak?

So what is happening of late. Well I went through a spate for a short time of finding lots of collection pieces on Ebay for a very reasonable price. For two weeks I was struggling to keep up with the flow of reasonable priced items on offer, and then with a bump just stopped. This wasn't from a single source but from all over the place, from the UK, from Europe and even from the US with a decent postage amount. Why the sudden peak of items and then hardly anything again, I have no idea.

Needless to say that my usual roller-coaster ride of interest and then general annoyance with myself and this stupid idea of doing this collection has made it's usual route of peaks and troughs. At the moment I'm in-between moods. Trying to persuade myself what a wonderful thing it is to collect such wonderful music and respect such great artists and then thinking that perhaps I should be slapping myself around the back of the head with a very large wet haddock for taking such a journey on in the first place.

I'm generally a lazy person. Being lazy and sitting on my fat arse is the major default setting for me. After being at work all day, the ONLY thing I want to do when I get home is sit in a nice comfy chair. Perhaps I may be persuaded to switch the TV on, maybe I will browse the interweb, but mostly it's pastimes that involve sitting. I reckon my brain also has the same desire. My brain also goes to work all day and wants to just go home and relax in a bowl of comfy warm mush. Even while writing this, my brain has had enough of working for the day and wants to just do as little as possible. That's not actually easy for me, I have a brain that never shuts up or winds down, I'm mentally on the go all the time, so my brain also nags me to just slow down a little by doing as little as possible. This of course includes doing this blog, or updating facebook, or joining in on a forum I'm a member of and, of course, all the other things I want to do generally in my life, such as sending an email to a friend and just staying in touch. 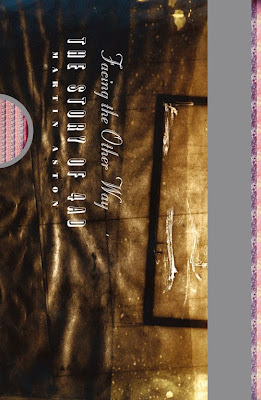 So now that I've put myself through a bought of flagellation and got my brain in gear (but still with fat arse firmly planted on sofa leather), what have I accomplished or found out since I last posted so very long ago. Well in the news......is the soon to be released 4AD book by journalist Martin Aston. Called "Facing the Other Way, the Story of 4AD". Set to be released on September 26th 2013, it will be the first official account of the label we love. Focusing on mostly the first 20 years of 4AD's history, it has the prestigious boast of having the cover designed by Vaughan Oliver and will also be available as a limited edition with 2 CD's of some of the labels musical history. Info here :

As a warning to all those looking to try and pre-order the the book, be aware that Amazon do not have copies of the limited edition on order to sell to pre-orders made on Amazon. Amazon may get some copies if the publishers don't sell all the limited editions and have some left to pass on. I fell into this trap with Amazon before when they list something they may likely never get their hands on......so buyers beware.

On a slightly different note, I've started to notice a pattern of reprints of cassettes. I say reprints because they are not official re-releases, but an obvious sign that the originally made stock has run out and new batches of cassettes manufactured. Cassettes are really easy to spot because of the change in cassette design during the eighties. In the early eighties, cassettes were solid colour plastic, usually white or black, occasionally other funky colours to match the general colour of the album design but the coloured ones are much more rare. By the mid eighties though, a new fashion for seeing the workings of a mechanical object became desirable, the watch makers Swatch being one of the trendier items that everyone wanted which showed the gears and workings of the watch behind garish cheap clear plastic. 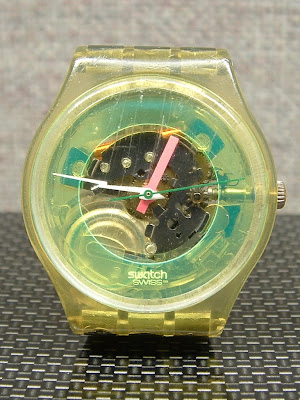 Cassette manufacturers such as TDK followed this fashion through, showing the tape wound up on the spools through clear plastic. Pretty soon, you couldn't get a cassette tape that wasn't trendy and see through and I suspect that 4AD had the same issue when ordering new stock. So there are distinct and obvious signs of a reprint of early eighties releases on cassette. This Mortal coil and Cocteau Twins albums are the first that I've noticed and I'm sure there will be more to be found.

So if you are interested in getting original cassettes for early eighties albums, stick to the solid colour plastics and not the clear.
Posted by jonnyhalfhead at 21:51 No comments: