How do you organise your vinyl, autobiographically?

I've started running out of room... and so begins the record collectors dilemma. If I'm making room perhaps I should also re-order my collection?


There is something very OCD about storing records. I'm not too bad with it, not as bad as some collectors that like to implement all kinds of wierd and wonderful filing systems. Collecting records is a strange past time. I think that any record collector would love someone to browse through their records in awe, jealousy or just admiration. Unfortutely, this rarely if ever happens. So it's probably best to sort your own collection in what ever way suites yourself, becasue it's highly unlikely that anyone else will be struggling to find anything in your racks of vinyl.

To start with I thought I had made some room, which I could then use to expand my growing 4AD collection into. But as is usual I couldn't just stick to just re-organising the vinyl. So I had a total rethink (once again) of how I store my CD's, cassettes, 7 inches, posters, awkward boxes etc and also my wife's books and our DVD's. The whole room then was up for a re-design. Then, if the room is under review, shouldn't the decor?

The spare bedroom where all my stuff is stored has had so many changes over the last ten years. To begin with it was a spare bedroom. Then it got transformed into the computer room, until we realised that the last thing either of us wanted to do was go and sit like billy-no-mates up stairs every time we wanted to go on the internet. I then redecorated the whole room, made a whole wall a rack of shelving units for videos, books and of course vinyl. I also designed and built a huge four poster bed to fit snuggly in the room. It was an amazing room, but it was never used as a bedroom and the four poster bed was so large there was no room for anything else.

So I sold the four poster bed and we got a bed settee. That did seem like a good idea at the time, a sofa for most of the time and a bed if visitors ever stayed over. That worked ok except we were never popular enough for anyone to stay over. Then when my wife started to study for her exams we needed an office, yet again. So now out has gone the bed settee and back in has come an office desk.

I made some room by moving around some of my box sets and set about re-ordering the 12" singles and LPs which were all in alphabetical order (easy mode). I needed to make room for my expanding 4AD which was the main reason for the re-sort. So I've split everything into three parts, 4AD, old music and new music. Typically this was a self styled seperation. My definiation of old and new music was pre-punk and post punk, so all my prog is pre-punk and all my goth and industrial is post punk. Of course there are some that are very close to call. Would Nirvana go under the pre-punk style as just another rock band, or were they heavily influenced by punk and therefore go under post punk? Of course they were punk influenced so that one was quite easy, but some records proved to be difficult. Still, I managed to split my collection into three parts ok. But then after an itial re-arrangement, I found out I didn't make much space for expansion at all. 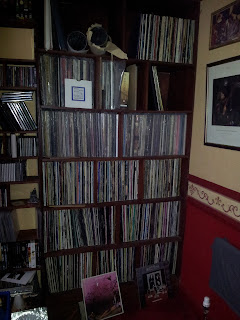 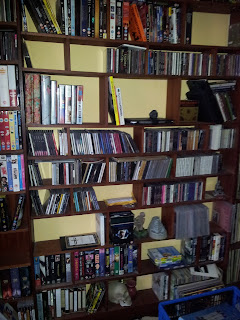 I had to get more vinyl storage space. I could have gone to a specialist cabinet maker. There are a few out there that specialised in vinyl storage such as the i-Cube. I had invented a more robust version of this myself 20 years ago when I moved around quite a bit. It involved a square cabinet which could be stacked either end up, that fitted vinyl inside perfectly but also cleverly stacked well either side my side or one on top of another to what ever arrangement I required. Each box was also handy to tip onto it's back and carry and stack when moving home. But I succomb to the simpliest solution, Ikea sell a unit system called Kallax that are perfect for vinyl and can easily be transformed into other useful additions such as draws and baskets. They also stack and fit well with other Ikea units as well. So I bought and assembled a two by two unit which sits nicely on a set of draws. That has opened up loads of extra storage space now on my main vinyl racks for more 4AD. 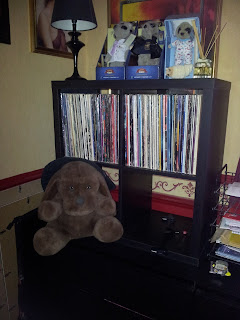 Once I've done the vinyl, then will come the CD's, cassettes, posters and everything else to re-organise again. Spare time to do this of course is also at a premium.

So one part of one room had to be re-organised, which had a knock on effect on the rest of the room and what a suprise, nearly every cupboard, draw and shelf in the whole house nearly has also been re-organised. Always remember when starting a job like this, there are always implications that also need to be taken into account which will throw out any plans you make completely out of the window. At least loads of tat has been thrown away from around the house, loads of clothes recycled and lots of useful but never used stuffies relocated to poeple that will use them.