Grab a Piece of 4AD History

So its the year end. I have had a good year, this humble blog has hit 20,000 views which I never thought would be possible. In the UK, the popular magazine "Record Collector" has published the 200 top collectable music releases from the UK. In that listed featured the Lonely Is An Eyesore 4AD wooden box set. I still don't have this, and each year its worth just seems to soar and soar.

It has made me think of how this magazine and the book they regularly publish, which I got for Xmas, called the Rare Record Price Guide 2014 are only published from a UK point of view, UK only releases in Pound Sterling. The pricing guide I can understand, but music is no longer national and record collecting in the last five or so years has become totally international. Most new releases such as the new Dead Can Dance album although printed in one country, does not belong to a single countries release area. When a release is sold online it can originate from anywhere in the world.

I suppose that is one thing that is making my collection interesting, is having completely unique releases for many different countries. The US, Canadian, French, German, Italian, Spanish, Greek releases all have unique labels, codes and matrices in the cases of many of the eighties releases. It's a shame that Record Collector don't get with the times and become more universal in the way that music collecting is. 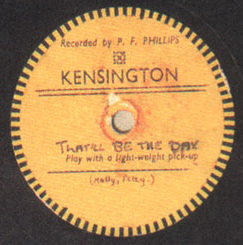 I suppose you want to know what the most highly collectable music release had the number one spot for the UK? It was the former Beatles group The Quarrymen, with an acetate record recorded by them in a 'record straight to a record' shop. There was only one made and Paul McCartney owns it and it's worth about £200,000. Thank goodness I don't collect the Beatles. Although the estimated price for that seems to have stayed the same over the last couple of years, I have been wondering over the last year, how wise an investment music is. So since August 2012 I have been keeping a track of the worth of my collection on Discogs, using the average selling price and not the highest or lowest, and comparing that against the number of items I have in my collection. Although not incredibly accurate, it does give some inkling as to what the market is doing. Of course, there are some elements that could skew the figures, such as the fact that I may already have the cheaper items in my collection so newer items collected may be worth more and therefore give a false perspective. But I suppose I can only go on what I have. On the other side of the argument is the fact that new releases when limited, always fetch a high price to begin with as traders buy possible collectables to sell. This initially inflates the second hand market, but then after time the worth decreases. So I think overall, the tracker could be reasonably accurate. 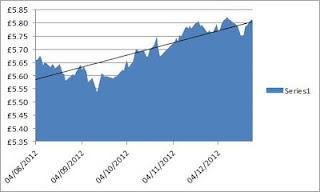 As you can see from a half years worth of data, the general worth is slowly creeping up. It's certainly not conclusive, but I will be carrying this on over the next year to see what the trend does in future. 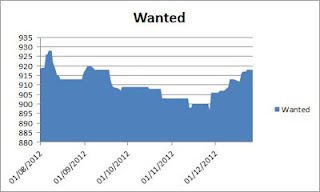 I have also been tracking since August 2012 how much progress I am making towards my target. It is a depressing state of affairs. As I have noted before, acquiring a release is another step towards a complete collection, but then I also find more items to collect. At the moment the count of wanted items is stable and thankfully slightly falling. It is a stark reminder of how difficult this project is. The awful state of traders quality to detail doesn't help either. The number of times this year that traders have advertised, incorrectly listed, or posted the wrong release seems to be getting worse, which just makes the process even more frustrating. 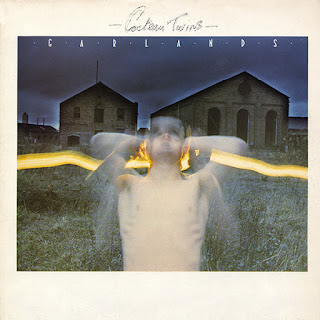 Which has happened again, which means that once again, I have a release to give away for the new year. This is another Cocteau Twins release, this one is a great freebie. I am giving away the original debut album "Garlands" released in the UK in 1982 on vinyl.

To win this great freebie, posted for free to the lucky winner, find me on Facebook under the name Jonny Halfhead, friend me and send me a message telling me why why you should win this original piece of 4AD history. A winner will be randomly picked from the entries as before.
Posted by jonnyhalfhead at 20:09 No comments: