A number of things this last couple of weeks. I found a guy on ebay selling a load of 4ad stuff. Not just a handful, but a boat load of stuff. I was curious, so asked him why he was selling what was obviously a collection. It turns out he had bought the whole lot as a collection from someone else to fill just one or two gaps in his own collection, then was selling the rest on. This has been a nightmare. A whole collection being sold off one release at a time, with at times, only 4 minutes between each item finishing on ebay. I wish a had a couple of thousand pounds spare, but I don’t. So I have had to watch many fantastic items disappear from view without even a close sniff at getting them.

Bidding has to be tempered I think. It’s too easy to get caught up in the frenzy and pay out a ridiculous price for something because at the time you feel desperate not to lose out. But it is surprising how many things come around again. From this lot of auctions a Colourbox release went for over £100. It’s hard to quantify paying anything over £20 for a colourbox release, they come up so often and so cheaply.

In the last couple of weeks this humble blog passed 10,000 views since its inception. Well.... what can I say? Ah, ah, bloody ‘ell, no way, I can’t believe it....or comments along those lines. I’m lost for words for you wonderful readers, thank you so much for your company. I hope I can keep you entertained for a few years to come.

There has been an interesting new addition to the collection. Staying with the Bauhaus theme, it’s the album “Burning from the Inside”. After the first album with 4AD and a couple of singles, Bauhaus moved to the parent label, Beggars Banquet. This is what 4AD was kind of set up for, find talent, sign it, promote it and if it takes off, pass to the parent label. This only happened with Bauhaus, why other 4AD artist didn’t follow the original plan I don’t know.

So the next handful of albums were under Beggars Banquet. But a few strange anomalies appeared from Greece. Rumour has it that the distributors in Greece didn’t have any Beggars Banquet labels but did have 4AD ones, so used them. But the labels are quite unique for 4AD, so I’m not sure of this explanation. Whatever the reason, the record label on the Greek album has 4AD labels. 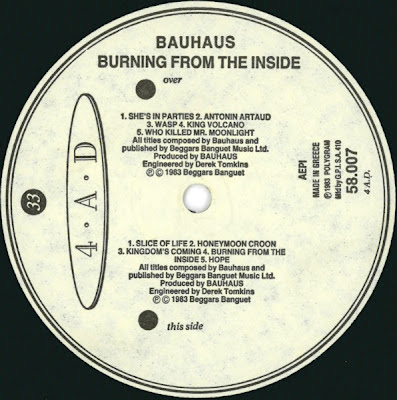 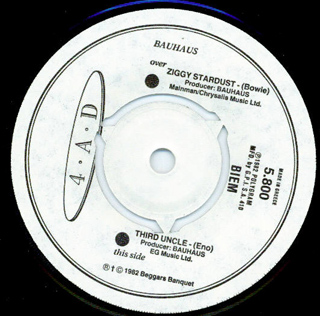 Moving on... after the last blog entry about the seven versions of the Bauhaus’ Dark Entries I had managed to piece together, and of course after all the praise I generally give Discogs, this week the seven entries I had carefully tried to list in Discogs have been hacked down to six entries. This is in accordance with the Discogs rules that states that only separately defined releases are to be listed and that this does not include matrix variations. This has become very annoying, as it becomes difficult to track matrix variations within Discogs. The only way to get this changed is to argue a lot in a forum about it...humph

Well if anyone has a Discogs account, have a read of my argument and enter into the discussion if you wish
http://www.discogs.com/help/forums/topic/344093
I shall be back soon. I’ve fluffed up yet again and bought a duplicate item, triple Doh..., so I may be giving away a Xymox promo 12”.
If you wish, have a look for me on Facebook and Twitter
Jonny Halfhead
Posted by jonnyhalfhead at 21:30 No comments: