Will I ever fall in love with Record Fairs ever again?

Over the last two weekends I have visited two record fairs in the vain hope of not relying solely on the internet to find the stuff that I want. There is a certain pleasure in rummaging through loads of boxes of interesting music. The elation when finding something you've been looking for for a long time is there for the picking, in good nick and priced reasonably is hard to put into words. It's mostly hard to put into words because I can hardly remember the feeling.

The vast majority of record shops have little in the way of anything different or away from the norm. I always know how poor a shop is going to be in the first five minutes of entering one. If the shop has no Cocteau Twins or Pixies, stuff that's can be easy to come by on the internet, there's practically no chance of finding any Dead Can Dance, Throwing Muses, Birthday Party or Clan of Xymox.

I don't just limit my searches when out looking to 4AD stuff. There seems to be an English vacuum in second hand goth, industrial or anything more alternative to Wonderstuff. It would be great to find a section with Front Line Assembly, Diamanda Galas, 1919, Ausgang, Sopor Aeternus and on and on. That would be a dream. But when a simple list as that is just a pipe dream what chance do I have to find any Cold In Berlin, Soviet Soviet or some of the other remarkable music that's around lately. Go online I guess

But I keep trying out shops and record fairs and the last two weeks have been fine examples of disappointment. The first fair was in Derby a couple of weeks ago. I had been to the fair once before and there was a guy with a stall that had mostly punk and new wave stuff, so I was eager to see if he had any new stock on. After over three hours in a record fair with about 7 or 8 traders with stalls, I didn't find a single item on my want list of nearly 900 items. I did pick up a few interesting little other items though including a Gary Numan LP, 2 Crime And The City Solution singles and a Shellyann Orphan single 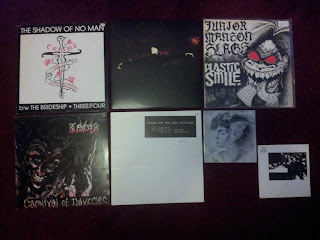 At least I walked away with something. It is disappointing to still have the same amount on my wantlist, to find nothing at all for my 4AD collection is extremely disheartening when a record fair supposed to be the best place to find these items.

So I decided to travel a bit further affield a go to a record fair that was billed as "the biggest outside of London". Surely that would be what I was looking for. Advertised as 100 tables with traders from all over the country, attended by buyers from all over the world it sounded too good to miss. One of the things I always find funny about these fairs, is how late the traders turn up to the event. 2 minutes before doors open and traders are still wheeling boxes of stock into the venue, leaving you thinking "this is your trade, wake up earlier in a morning".

There may have been 100 tables (I didn't count), but there were only about 15 to 20 traders, three of which had been at the other fair in Derby just a week before. On asking they had no new stock since the week before. Then as usual there were the bargain basement traders. These have hundreds of CD's, usually mass bought stock that no-one can sell. I know even without spending hours looking that there's gonna be nothing in there. After about three minutes of walking two loops around the tables, I knew only one of them had any chance of anything remotely like what I was looking for. Still I persisted and stretched my patience as much as I could tolerate, knowing I would be writing this blog, and searched though as many of the traders stock as my willingness allowed. But my initial hunch was right, as aways. Only one trader had anything worth buying, the one I had picked out in the first three minutes and none of his stock hit any of the hundreds of items I was looking for, except one. 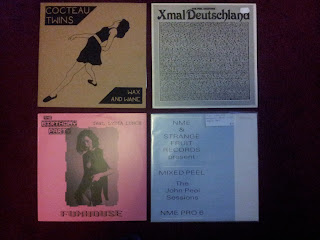 The NME Peel sessions compilation was the only find out of thousands of records. I did pick up Cocteau Twins and Birthday Party bootlegs as well as an Xmal Deutschland peel Session release, but none from my list. The bootlegs were quite recent and the Peel session was some years later after Xmal Deutschland had moved on from 4AD.

It is dis-heartening at times. I would have thought after this long that I would have picked up some specialised trader, eager to find the stuff I want. Instead I generally get "good luck with that" in a semi-sarcastic voice based on the experience of how rarely 4AD stuff is picked up and how quickly it's bought up. As much as buying online is nowhere near as satisfying as browsing through physical boxes looking for that special gem, it's the form I have to keep relying on.

As a finishing note and as mentioned before, I'm accruing quite a stock of duplicates again just wanting a good home. So watch this space as there are plenty more 4AD items to give away. Here's a sneak preview and you won't believe some of the items I have that just maybe you could own soon. Tell me if you recognise any... 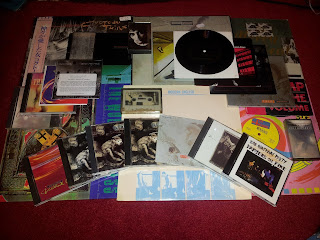 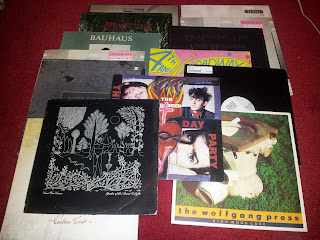 ...and as a last note Andy and I are back in the studio again putting together another song. After months of just not feeling it, Andy has managed to kick me into shape and we're composing again.

Until next time....guess the releases
Posted by jonnyhalfhead at 21:00 7 comments: