I can't believe that I have left it this long to post, I'm so sorry everyone. I'm still here and still plowing through what seems like such an impossible mission. The last few months have been  depressing in terms of progress. While I have been acquiring lots of items and some really cool stuff, I have also been discovering lots of releases I didn't even have in my list of items to acquire. This is a monumental project, which as is usual, not helped at all by the traders and shops in this country.

During my absence and in line with a previous blog entry, I had a brief look into any record listening evenings that someone may be running locally. These are similar to book clubs where people from the group nominate an album and everyone switches off phones and distractions and just listens to the music together. I love that idea, but couldn't find anything like it around. I asked one of the local record shop owners if they had thought of doing something along those lines in their shop one evening and they had tried it, but because of the minimal floor space and no comfortable seating, a relaxed and comfortable atmosphere just couldn't be correctly attained and so after just two attempts it stopped.

For the concept to work, a club or pub would be needed, preferably with good vinyl audio equipment, with sofa's and relaxing atmosphere and somewhere away from the noise and hustle of the town centre. Instead of aggressively pursuing anywhere, I just put aside one evening a week to switch off the TV, get the vinyl out, switch off the phone, laptop etc and just devote myself to listening to two albums in the comfort of my living room. At first it was difficult to make myself do it each week, on my own for the evening and the TV being the easier option, but I've persisted. Over the last couple of months a couple of times, a friend has dropped in and brought an album with them. My friend Andy brought a Pete Bardens album one evening and another friend Daniel brought in Alison Moyet's recent album, on red vinyl! The atmosphere is perfect at home and the music has been diverse, but mostly it's been a singular affair. So if anyone ever fancies joining me and bringing along an album, then get in touch on Facebook, it's becoming an open house if anyone is interested.

Listening to music in this room is just awesome 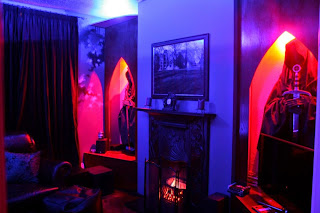 Over the past few months I have been reading a book called Last Shop Standing about the success and fall of independent record shops here in the UK. While it has been a fascinating and humorous read and I can mostly agree that the major record companies have been their own worst enemies, I have found it funny from the book that the writer seems to believe that record companies have some sort of obligation to keep independent record shops in business. This year has shown to me how much independent music traders in this country are their own worst enemy.

In September, my wife and I were visiting friends in Bracknell for the weekend. Bracknell is only about ten miles away from the city of Reading and on the very same weekend, boldly advertised in my monthly Record Collector, was an international mammoth record fair, boasting 120 plus stalls. It was an opportunity not to miss, surely from 120 plus stalls and not forgetting the words "International" and "Mammoth", I would have every hope of snatching a good few items from my list of near 950 releases that I still needed to acquire. On the Sunday, I cheekily made my apologies to my hosts and drove off to get there at doors opening at 9am. I was surprised that there was practically no-one outside the venue which was a sports leisure centre, except for a couple of people going to use the sports facilities.

The record fair was in one of the indoor courts, which on approach looked a lot smaller than I expected. I was the only person at the entrance point and paid my entrance fee to find at the very most there was only about 30 traders in the hall. Some had a single table, some had a couple of tables and the odd few had three tables. Even counting up the tables I couldn't get anywhere near 120 plus, just in case "stalls" meant something other than the number of traders I was expecting. I was there, so I thought I would make the most of it and spent 2 hours rummaging around the stock......NOTHING, Nada, Zip....Bugger all. How, out of a list of 950 releases, I couldn't find a single thing, baffled me. Although if I collected standard rock albums, sixties crooner albums or chart hitting punk singles I would have been in my element as I hardly saw anything I've not seen a million times before.

To say I was disillusioned would be an understatement. Non of the traders sounded foreign at all, they all had quite strong English accents and I didn't see a single mammoth! The large fair was my last hope of being able to find records the old fashioned way with some human interaction, but it seems more and more unlikely. I sent an email to the organisers of the record fair asking them why they advertised having so many stalls when there was nowhere near the number and the fact that I travelled half way across the country for it (kind of). I haven't had any reply, unsurprisingly.

Last week I had a holiday in Scotland. Whenever I go anywhere, I always make a list of any records shops in the area that I might take time to visit. There is a record shop of 35 years trading that sits in the heart of Dundee called Grouchos that I noticed and had to give a try whilst out that way. I was shocked to see record sleeves in racks, without any cover protection, with price stickers stuck on the sleeves. They were all battered and tattered and I hate to think what damage would be done when trying to take those price stickers off. Some more collectable items were in plastic sleeves on high shelves, one of which was a Prince Purple Rain album on purple vinyl which I just had to have. But apart from this one album, that wasn't even on my list of wanted releases, none of the 950 releases I was looking for was in store. It's no wonder record shops have nearly disappeared over the last 20 years.

In my usual attempt to constantly revive my interest and motivation and keep my fervour alive, a couple of months ago I wondered if I could get my list of wanted releases below 900 by the end of the year. As a simple idea it seemed like an easy target, but it quickly seemed more of a challenge than I initially thought. I'm constantly finding more stuff to acquire and this year for the first time, the number of purchases outweighed the number of discoveries. I've shown this before, but it will be critical over the next few weeks. This shows the number of  releases I have found I still need to acquire, recorded as often as possible in a spreadsheet a few times a week 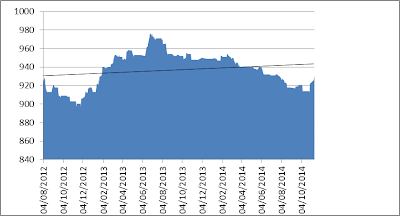 Over the last couple of months, I managed to get closer and closer to that 900 mark well ahead of time to hit my target. But over the last couple of weeks there seems to have been a rush of releases I have discovered that I didn't know about before that I have had to add to my list of wanted releases. The target has started to look difficult to accomplish. I'm now at 928 releases. If I had an endless supply of cash, I suppose the 900 target would be a joke, but I have to keep a level head and buy only at the most reasonable price I can.

So, up to the end of the year, I'm going to do a running blog entry. Starting at the next release I acquire, I will start a new blog entry and add to it most days as I get another release (or perhaps even when I don't) on the run up to the end of the year. Ok, it's a poor attempt to make up to you all for not posting for such a long time, make up for it by going over the top. Hopefully it will give an insight into the day to day struggle of finding what sometimes seams like the impossible. Watch this space.....well not this literal space, the space above the next blog entry!
Posted by jonnyhalfhead at 20:06