Keeping on the same track as my previous submission by staying with the Cocteau Twins, I've recently collected all of the release versions of their single/EP Peppermint Pig. Although of course, this is everything I've discovered so far of of Peppermint Pig, who knows how many other versions I may find lying around the corner.

It seems the Cocteau Twins were not very happy at all with this release. As usual, there's a good write up of the history of Peppermint Pig on the Cocteau Twins Fan Site. This was the first and only time the Cocteau Twins used an outside producer, Ian Rankin of the Associates. The result was a release that the band were not happy with and didn't represent what the Cocteau Twins intended. So before I go through the releases, I'll try and explain how a producer can make, or completely arse up, a release.

An artist or a band put together a song either in the studio, on the road or by purposely sitting down and composing closed off from the outside world. If not composed in a studio, songs will be a deliberate or experimental process not generally driven by anyone outside. In other words, what makes that artist or band have a particular style is defined through that process and not mixed up by the influence of another interfering artist. Sometimes, when a song is composed, it helps when recording that song to have another artist with another set of ideas to help push the artist or band to embrace a slightly different approach. Although not an additional member of the band or a co-composer, this extra artist can take the raw recording of a song and add or remove elements, direct the recording process in a certain way, or even re-arrange a song completely. This is what a producer is, adding an extra element of style or influence on the final production of a song.

This works well when the producer chosen "gets" the music or understands the focus and intention of the artist(s) and the vibe the artist(s) is trying to attain. A producer can make or break a record. When Joy Division recorded their debut album Unknown Pleasures, it was the producer Martin Hannet that heard what made Joy Division different to other punk bands and made that record have the iconic and distinct sound that it had. Joy Divisions songs were unique, but is was the production of the album that highlighted that difference and made it stand out from the crowd.

This nearly always creates friction and frustration from the artist or band. In the case of Joy Division, they didn't like Unknown Pleasures at first as they felt it didn't sound like them at all and Martin Hannett was a difficult, moody and bad tempered producer to work with. But Joy Division couldn't argue with how the production had added an extra definitive element to their songs.

The real problem comes when the producer just doesn't get what the band or artist is trying to do. And I think this was the case with Peppermint Pig, to the point that Cocteau Twins never let an external producer work with their recordings again.

So onto the Peppermint Pig release versions.

I'm showing eight in the picture below. Two of these are postcards and not the actual releases. One is also the CD version, that although was released in 1991 and so not released in the first decade, I've included as a useful record of when Peppermint Pig was released on CD. 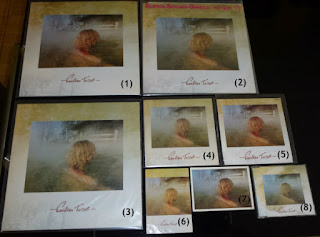 These are the fronts of the releases, numbered for reference as follows : 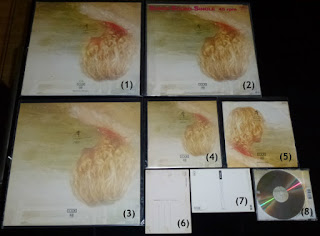 These are the rear sleeves. Notice that all the rear photo's on the back are upside down except for the Netherlands 7". 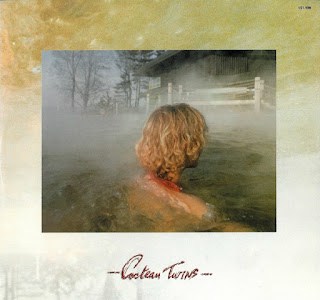 This has a distinct Label code 151.109 in the top right corner of the front sleeve. 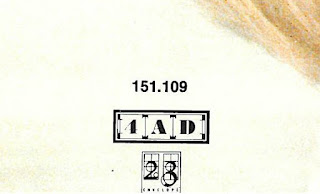 The rear of the sleeve has the Netherlands code, the 4AD logo and a 23 Envelope logo in the bottom centre 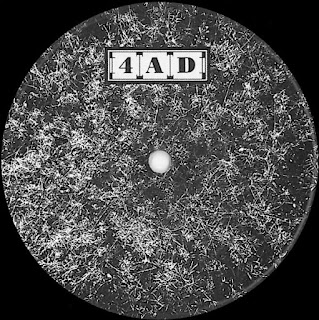 The "Grass" label is the same as the UK version 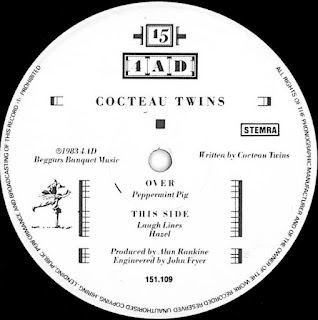 This has a large pink banner across the top of both the front and rear sleeves. While the UK and Netherlands 12"s sleeves are made of card, the German release is thin paper and quite obviously different in thickness by feel. 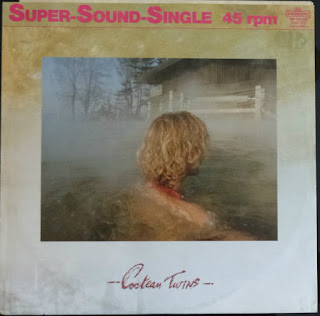 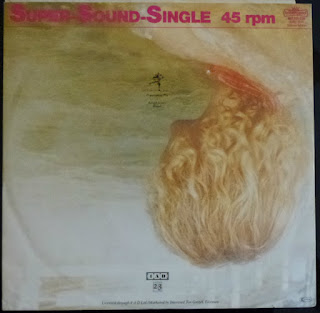 The labels aren't the 4AD labels, but blue Intercord labels. There are only 2 tracks on this version as opposed to three tracks on the other 12"s. 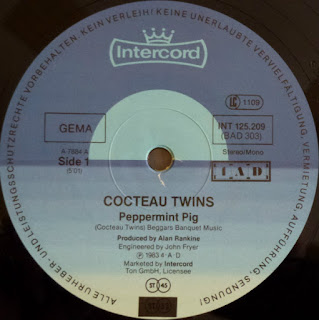 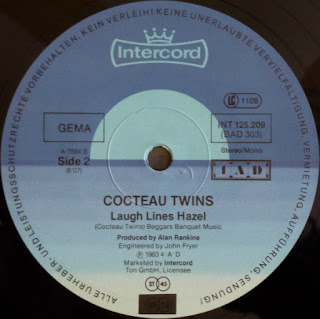 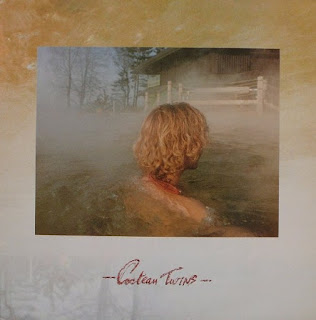 The rear just has the 4AD and 23 envelope logo's and no other print over the photo at the bottom of the sleeve. The labels have a "grass" label on the one side, then a 4AD printed label on the other side, slightly different to the Netherlands version. 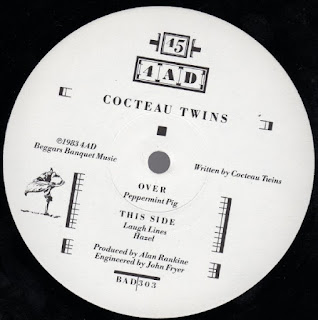 The 7" is practically a miniature version of the UK 12" as you would expect, except for the inclusion of the catalogue number at the top of the rear sleeve - AD303. Why this is on the 7" and wasn't put on the 12" I have no idea. 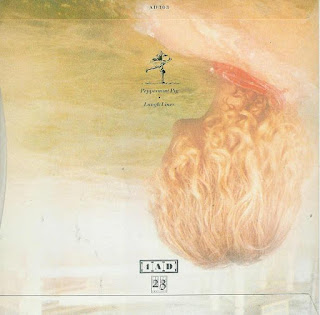 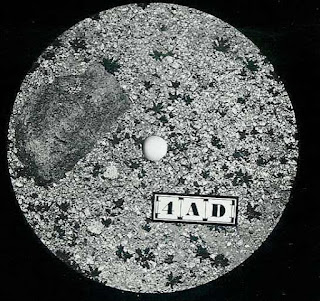 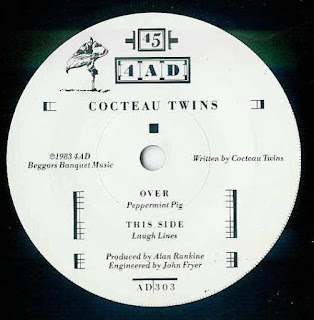 The 7" single is similar to the Netherlands 12" version, with the catalogue number in the top right of the front cover. This same catalogue number is on the top right of the rear sleeve as well. The bottom centre is slightly different on the rear sleeve as below. The big difference to all the other versions is that the rear photo is actually the right side up, unlike every other version 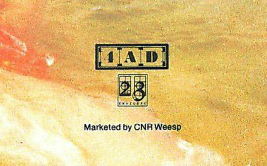 The labels are similar to the UK version with one side being the "Dry Ground" picture and the other having the Netherlands catalogue number printed on it. 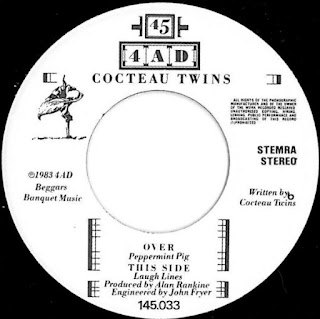 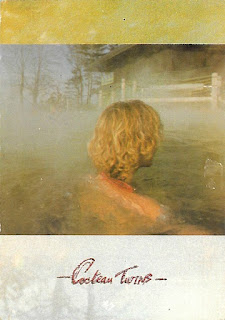 I don't know how legitimate this postcard is, but it has it's own catalogue number (which proves little I know). So I don't know if it was included with a release or was a separate promotional item. The print down the centre says "Delta Editions Imprime en France - Tous droits reserves" 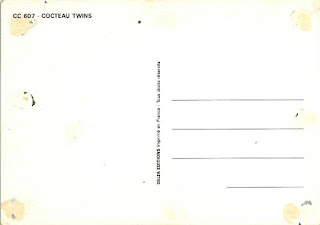 Landscape version of just the photograph from the Peppermint Pig cover. No band logo or writing on the front. Postcard No 1 in a series of 12

I wouldn't normally include anything outside of the first decade. But this was the only time the Peppermint Pig single was released as a single on CD. It was released as part of a singles box set and separately as well. This included both the 12" extended version and the 7" version of the title track, so had 4 tracks on it. The front sleeve is as plain as the UK 12" and 7" versions, but the inside fold of the sleeve has the photo upside down the same as all but the Netherlands 7". 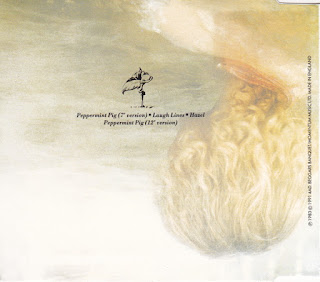 So there is the list so far. I'm certainly not saying that this is definitive, there may well be more to come. But as yet I haven't seen anything else. There maybe a poster, although I haven't discovered one yet. There may also be a French release that goes with that postcard, if that postcard is genuine. Of course there will be somewhere, test pressings for these releases, if they haven't been destroyed. But I will keep my eye out for any items missing

No-one has yet claimed the Cocteau Twins- Garlands album I was giving away last month. Is there no-one that wants it??? Surely not. If you want a genuine, free, debut vinyl album of The Cocteau Twins Garlands, then send me (Jonny Halfhead) a message on Facebook telling me why I should give this away to you. No catch, free postage, just take it off my hands.

Thanks for reading and let me know if I have missed a release, or even get in touch and have a boast if you have all of these already. Ta ta!

ADDITIONAL : 15th May 2016 - This is a typical example of the fluidity that will be required from this blog. I have found another addition to this list. The US CD single on Capitol. This is actually outside of the first ten years as it was released in 1991 in the same year as the UK CD single. 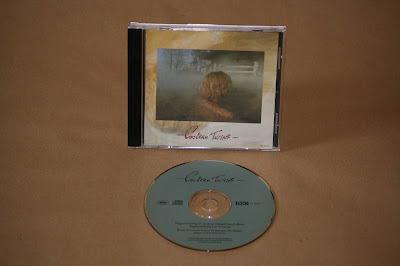 This came in a full size jewel case, instead of the thin single jewel case for the UK CD single. This was also part of a US box set and sold separately

Anyhow, the US version is different from the UK version 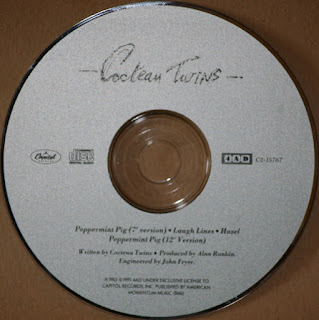 The back sleeve has the Capitol logo as well as the 4AD Logo. If there are any other editions discovered I will add them as well.
Posted by jonnyhalfhead at 19:03 No comments: