This weeks triumph is getting the second part of the two format Cocteau Twin’s US Promo called I Wear Your Ring. This was released in the US on Capitol  in 1990 and came as a 12” single and a CD single. The CD single I acquired recently finishing of the duo.

This isn’t incredibly rare. I have seen both of them a number of times on various online markets. The reason I have waited this long to acquire both is that most of the time they are way over priced. The fact that both of these come up regularly, shows that there isn’t a shortage. It would seem that if you stick the word PROMO on a release, it’s suddenly worth a lot more. Some promo’s have more copies distributed than the actual release it’s promoting. So a promo is not a hard and fast rule to rarity. Yet another example of the market dictating to the buying public.

So maybe I put my money where my mouth is. So I will. I’m going to give away yet another single to some lucky person. Yes....you guessed it, I did it again...DOH! I’ve bought the same thing twice. Actually this time it wasn’t a typically idiotic absent mindedness, this time I have an excuse. I happened across a set of four promo CDs in a single sale, from which only one of them I already had and, of course, included in this bundle was I Wear Your Ring and Iceblink Luck.

The other two gems in this bundle were Carolyn’s Fingers, a US Promo CD from 1988 and yet another Heaven Or Las Vegas Promo (There are 5 of them at least) from the US on CD. This package of four, was bought for less than some of the standard singles being sold.

Ok, so if you want the chance to win a free Cocteau Twins Promotional CD single, free postage included, then answer a very simple question

If you send your answer to my email address which is jonnyhalfhead followed by at gmail.com, or even find me on Facebook, Jonny Halfhead, become a friend and send me the answer in a message, the winner will be picked at random. (I’ll get my lovely assistant, aka wife, to randomly pick the winner). Get your answers in by Saturday 11th February 2012 and the winner will be chosen during that weekend.

Thanks as always for reading and good luck
Posted by jonnyhalfhead at 19:52 No comments:

A History through catalogue numbers

Another gem acquired recently is the Spanish release of the Dead Can Dance debut album. I love this album and, as mentioned in the previous blog entry, non UK versions are rare to find. I had never seen a Spanish version, although I knew of it’s existence.

This was released under the Label Dro. The catalogue number is useful to help piece together when a release was licensed and distributed in another country. The pattern I have noticed with overseas licensing is that when an original release is licensed to another label, the license generally covers that version of the release only. Any subsequent re-releases by the owning label, seem to be given to yet another label overseas or re-negotiated again with the original one.

The history of these releases can be traced by following the catalogue numbers. A lot of labels, in a similar way to 4AD, have a catalogue history of sequential numbers. By looking at the release dates of other releases by the same label and the history of the label  itself, you can put together a time line. The Shock release of the Birthday Party’s album Prayers on Fire, has a catalogue number of CAKE2. The label Shock was founded in 1988, so wouldn’t have released anything before that date. The CAKE catalogue numbers looked to have been released between CAKE1 in 1996 and CAKE7 in 2001. So it would make sense that CAKE2 would between these two periods. If you do the same with the other releases, you generally see a pattern of periods where the licensing moved from one label to another.

This method helps to identify when the Dead Can Dance album was released in Spain. The Dro label was started in 1982 and has a long string of sequential catalogue numbers. This helps show that the debut album from Dead Can Dance was issued in Spain around 1984.

This method doesn’t always work, but it’s another piece in the puzzle which helps the detective work.

It is quite amazing to think that Dead Can Dance were distributed in the first year abroad. I also find it amazing that I managed to get a copy of it too. I know, I’m easily pleased aren’t I?
Posted by jonnyhalfhead at 19:44 No comments:

Describe what your selling or the puppy gets it!

I have been struggling lately to know what to add to this blog. I suppose that I’m amazed that anyone finds what I say to be of interest. Which also means I’m a bit nervous about being disappointing. I’m excited about what I collect, I have to be, otherwise there would be little point to doing it. I’m also aware, as a collector, of being an excitable geek about collecting and acquiring a rare gem and that perhaps nobody else would be interested in what makes me that excited. Oh well, I suppose a geek is what a geek does.

There has been a flurry of activity this week. The first was a Cocteau Twins Canadian release of Blue Bell Knoll.

It’s very exciting to get a release from another country. I live in the UK where the 4AD label was founded. I grew up with these releases and came to realise that the UK has a great history of creating music for the world. With that comes a certain pride that UK music gets aired around the world.

Whenever I look for 4ad material to buy, the obvious default of many of the releases are the UK versions, then the US releases are generally the next most abundant, then all the other overseas versions. These other country versions are a lot harder to find. Whether this is because they were released in lower numbers, or because the market enjoys holding them back for a premium price, is unknown to me. I suspect it is the former. The UK releases were popular at the time, so there would have been many created. The US number of items for a release would have been huge in comparison to the UK simply because of the audience size. The other countries outside of the UK and US may have been in a lot smaller numbers.

This makes them more difficult to find and even more difficult to find cheaply. Many traders know this and bump the price up. Collecting these rarer releases can be very frustrating. About half of traders online do not put vital details with the listing they are selling. So a lot of listings on various sites online do not have any decent description at all. Country, label, catalogue number, matrix or barcode numbers, any would be useful. It’s surprising that these traders do not even bother with the basics to sell what they have. I refuse to contact and email every seller that just may have the Spanish version of a release just because they are one based in Spain and are selling Cocteau Twins - Blue Bell Knoll.

I’ve reached a point already, where if the trader cannot be arsed to add a description, I can’t be arsed to do business with them. Join me in my campaign to rid the world of naff traders, to flatten them down to a useless mass of flabby, snot eating lazy no gooders. Starve them of trade and, therefore, bread and butter, cut out their livers and sell them on the black market........

Hold on, maybe I’ve gone a little to far? Ok traders....be arsed please!
Posted by jonnyhalfhead at 20:03 No comments:

After going off on a few tangents, lets get back to this 4ad collection….thingy.

I initially thought that at least on one multiple version release I had managed to collect everything. This was the single Sweetness and Light by Lush. Discogs has listed the UK 12”, 7”, Cassette, CD single and a US CD promotional single. Now that I have all these, I was full of self congratulation. But, as is typical with this collection, there must be more. There will have been test pressings of course, if any survived and got passed on. Then there are a couple of questions that spring to mind......

Were there any promotional pressings done for the UK? Of course as is often the case, test pressings could have been used for promotional means. 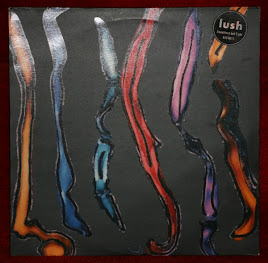 But then what of the US promo CD? If a promotional CD single was used in the US, why wasn’t it generally released? Or was it also released in the US and I haven’t come across one yet? According to Wikipedia, Lush got to number 4 in the US Modern Rock charts with Sweetness and Light. This is also backed up by the US Billboard website.

If this single did so well how come I have never seen a US standard single, there must be thousands of them if it reached no. 4 in the chart? I have also checked out a fan website, which is rather good and worth a look over.

This does contradict itself though with the release of Sweetness and Light.
“On February 26, 1990, Lush released their next EP, Mad Love, and its first single, "Sweetness and Light." Produced by Cocteau Twins' guitarist Robin Guthrie, Mad Love provided another step in their musical growth and got the attention of Warner/Reprise Records, who licensed the band's releases in the United States. “ 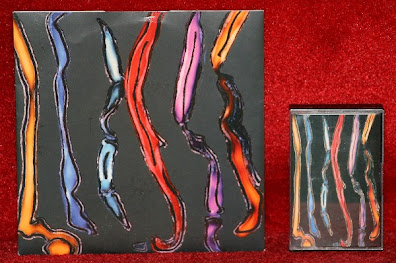 Then later in the same article
“In December of 1990 4AD/Reprise compiled and released Lush's two preceding EPs as Gala, their first release in the United States.”

Aaaargh, it’s a minefield. Everything points to a general release of Sweetness and Light in the US, but i haven’t seen any physical evidence of it. Unless the UK single was exported to the US for release. This is possible, but I would think unlikely that an import would make No. 4 in the US Modern Rock singles chart. Logistically it wouldn’t make sense, unless 4AD purposely lost a lot of money doing it.

This is quite typical of collecting music and also the reason why it becomes difficult to know how successful you are in completing a collection.

Delve a little deeper and some answers come to the fore. Use the links on Wikipedia and the chart that shows Sweetness and Light reaching number 4, are based solely on airplay and not units sold.
http://en.wikipedia.org/wiki/Modern_Rock_Tracks
Ah, so this is not proof of a US release. So it looks as though this single was never released in the US except for the promotional CD which obviously contributed to a lot of radio play.

So, maybe I do have Lush’s Sweetness and Light in all formats....woohoo!
Posted by jonnyhalfhead at 19:19 No comments: