One package today and at last, a release actually on the existing wantlist. It was the German vinyl release of the Modern English album After The Snow. That leaves only another 13 versions of that album left to get my hands on.

That's the wantlist down to 930. My goodness that seems like a huge ask now to get down to 900 by the year's end. The goal post most certainly keeps moving and Betty's useless, she hasn't bought a single release for me yet!! Oh well, the search goes on....

At the beginning of the day, the postman came and went and I was left empty handed. But then a courier turned up later in the day with quite a large box from the US with my name on it. Inside were two CD longboxes of the Pixies albums of Doolittle and Bossanova. Longboxes have an interesting history. They were introduced to help customers moved from the large packaging of vinyl to the smaller and more expensive CD. It also helped to display CDs in vinyl display areas and because of their bigger size helped to reduce shoplifting. Here is our dog Betty demonstrating the size of the 12" longbox 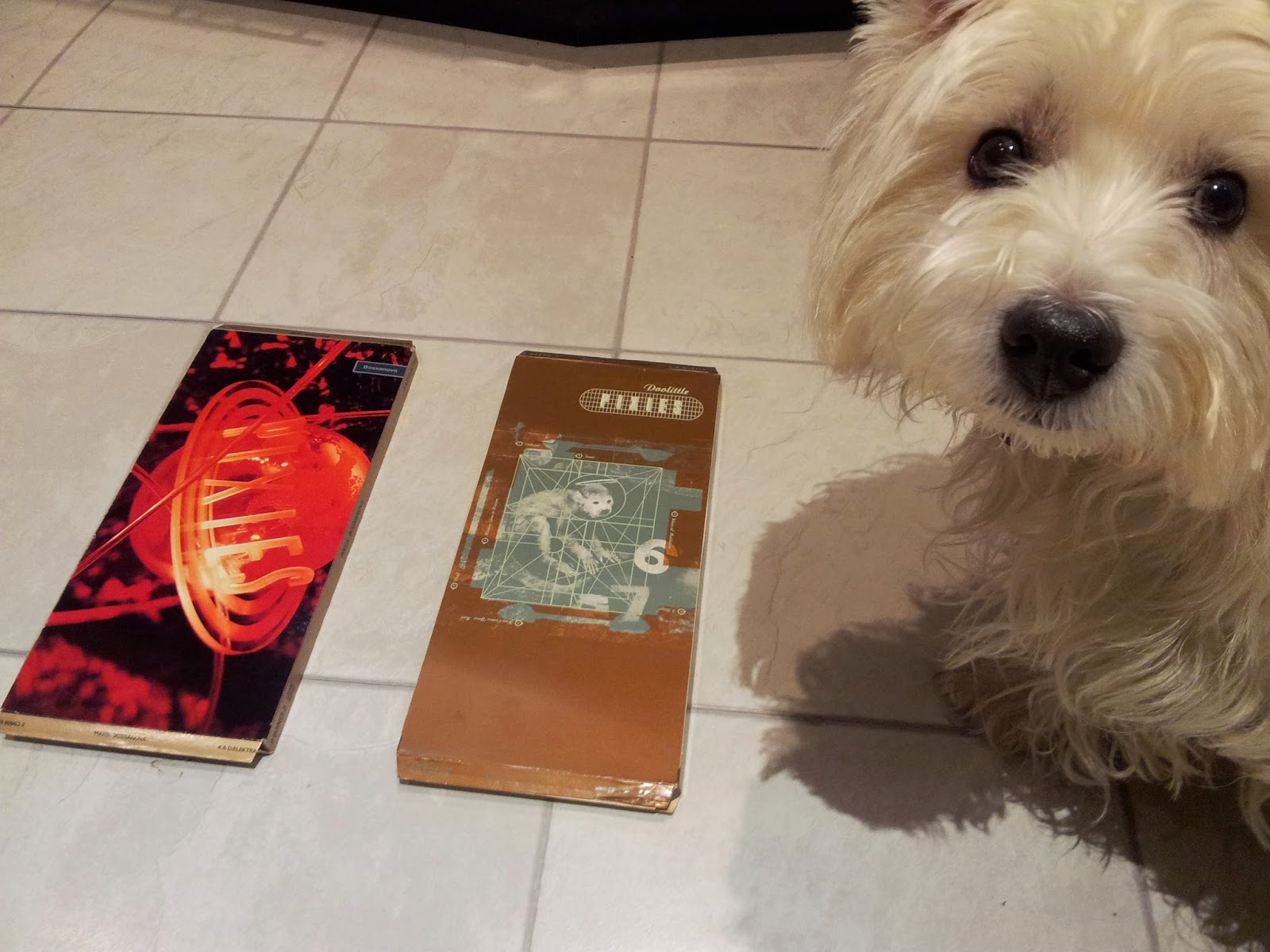 Here is a wiki on the longbox.

It seems, although most CDs were sold in longboxes, most customers saw them as throw away packaging like a plastic bag and threw them in the dustbin. Now they are quite sort after.

At last some items delivered. Problem is, these two release weren't on my wantlist as I wasn't sure if they existed. So the wantlist is still stuck at 931. This is not looking promising at all!

I got really excited when a small parcel landed on my desk this morning, at last maybe the count can actually go down. It was not to be. I had forgotten the DVD called Sanctuary that I had bought a few days back. It's a documentary about Lisa Gerrard, which I am excited to get, but was hoping to hammer down the wantlist even in a small capacity. The wantlist stays at 931. I'm still struggling to find anything on ebay, but have found a couple of decently priced items on Discogs.

I did listen to The Sisters Of Mercy's album Floodland last night. It is funny how time changes one's perception of music. In the late eighties I really loved that album, but got sick of the worship it got a few years later, like it was some sort of goth must have. It was good, but not that good. On this listen I noticed how an EP's worth of ideas can be over stretched out to an albums length. The first two tracks Dominion and Mother Russia are one song without even a chord change, the album title track is used twice, the main single This Corrosion is mixed out about twice as long as it should have been and 1959 looks like a bolted on afterthought because there was 5 minutes left to make a full labum's worth. The album is ok and it did inspire a lot bands to go into territory they had not gone before, but nearly 30 years later it made little impact on me again. Not a patch on Clan of Xymox's Medusa.

Nothing was delivered yesterday and nothing came today either. I'm running out of stuff that I can find on ebay again, it's as though I was just lucky the last couple of weeks and now the luck has dried out. Don't get me wrong, there are plenty of items from my wantlist that are on ebay, they're just not reasonably priced especially when adding the postage on top.

I then noticed this morning that the album Sleeps With The Fishes by Pieter Nooten and Michael Brook has a Spanish vinyl version, a Japanese CD version and another UK version not previously listed. Therefore my wantlist has gone up, while my achievements have flatlined. Time is running out!

Visited a small record fair this morning about ten miles from home. I was there to meet a vendor I had met at another record fair a month ago and said he may have some 4ad stock for me and would bring it with him. I emailed him my wantlist a couple of weeks ago and went to the fair with a smattering of hope. No luck once again though, he had been busy at work through the week (he's only a weekend music trader) and didn't have time before going to the fair to go through the huge build up of stock that he struggles to find his way through. Still, there's some hope that he still actually might have some interesting stock at some point for me in the future.

There were only about five vendors there, of which only one other had anything remotely alternative. I would have come away empty handed after two hours if it hadn't have been for finding a specially remastered version of The Sisters Of Mercy's Floodland album that shouted at me to take home. I think that album will be making the album listening night this coming Tuesday.

At least the wantlist count has stayed at 928 for a day, seeing as I haven't found anything as yet to add to it, thankfully.

Two parcels have been delivered today. The first one is a magazine called Debut from 1984 in which each edition came with a a compilation LP included. The magazine is 12" x 12" and looks like a gatefold album with a thick booklet in the middle. The reason this magazine is the collecting list is because of the inclusion of a Colourbox track called Fast Dump (very likely a song about an emergency poo). 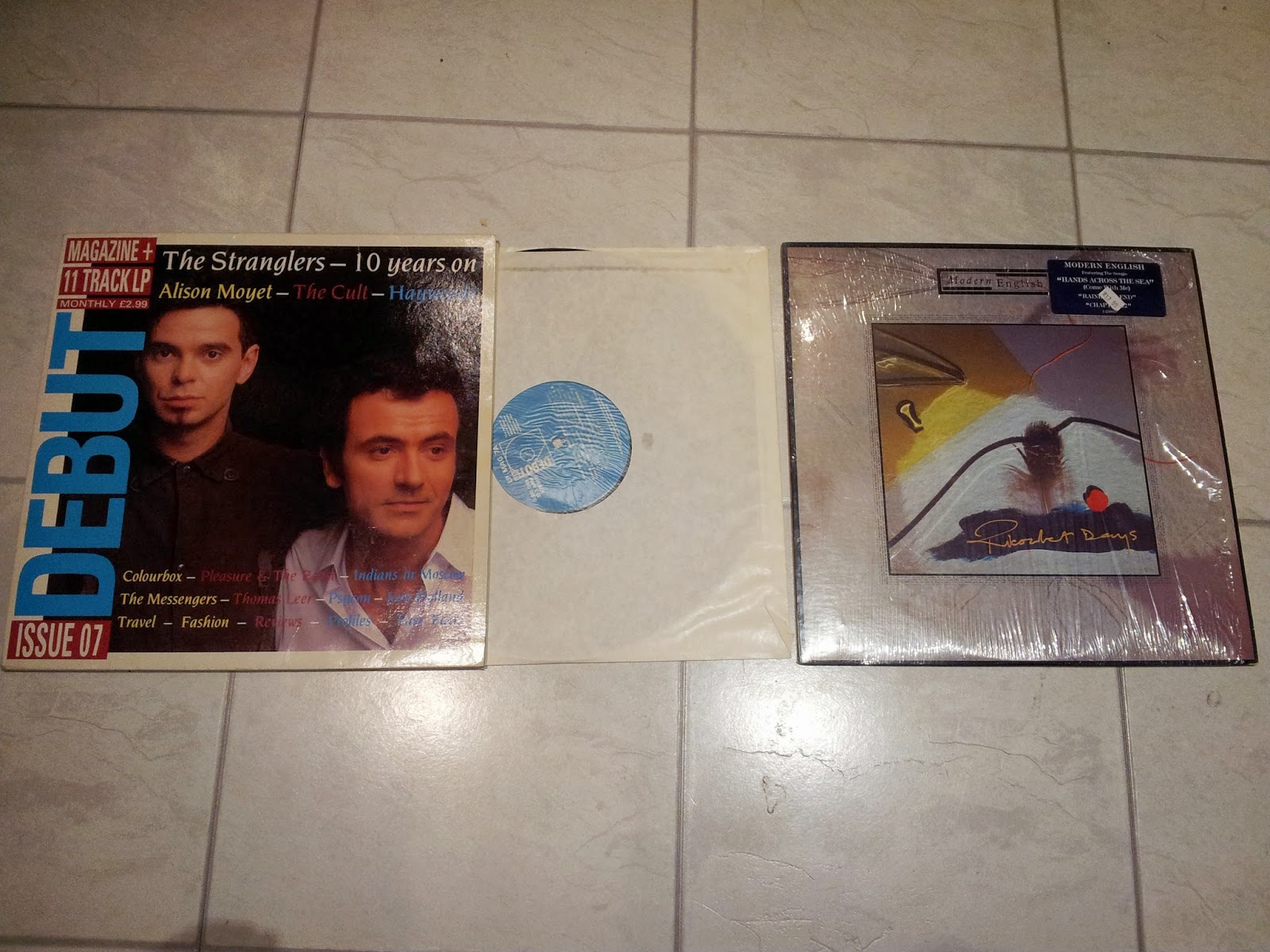 The second package was a US pressing of the Modern English album Ricochet Days also from 1984. That has moved my wantlist count down to....928. That would have been 2 down, except that the German compilation called Formel Eins Space Hits I found out today, has a cassette version not currently in the list. 2 down and then 1 up, I'm still yo-yo-ing. Oh well, there's a local record fair on tomorrow, let's see what that brings

A couple of days ago I discovered a copy of Ultra Vivid Scene's 12" single of Mercy Seat on ebay. There's a  version with a green sleeve with a circular hole cut from the centre of the sleeve and another sleeve of the same release that has no hole cut but in grey. I have both of these, but the photo on ebay looked like a version that should not have existed, a green sleeve with no hole cut. I asked the vendor what colour the sleeve was, just in case the camera shot was not colour accurate (which can happen) and the answer came back a resounding GREEN. I had little to lose, it was only selling for a couple of pounds, so the risk was worth taking.... 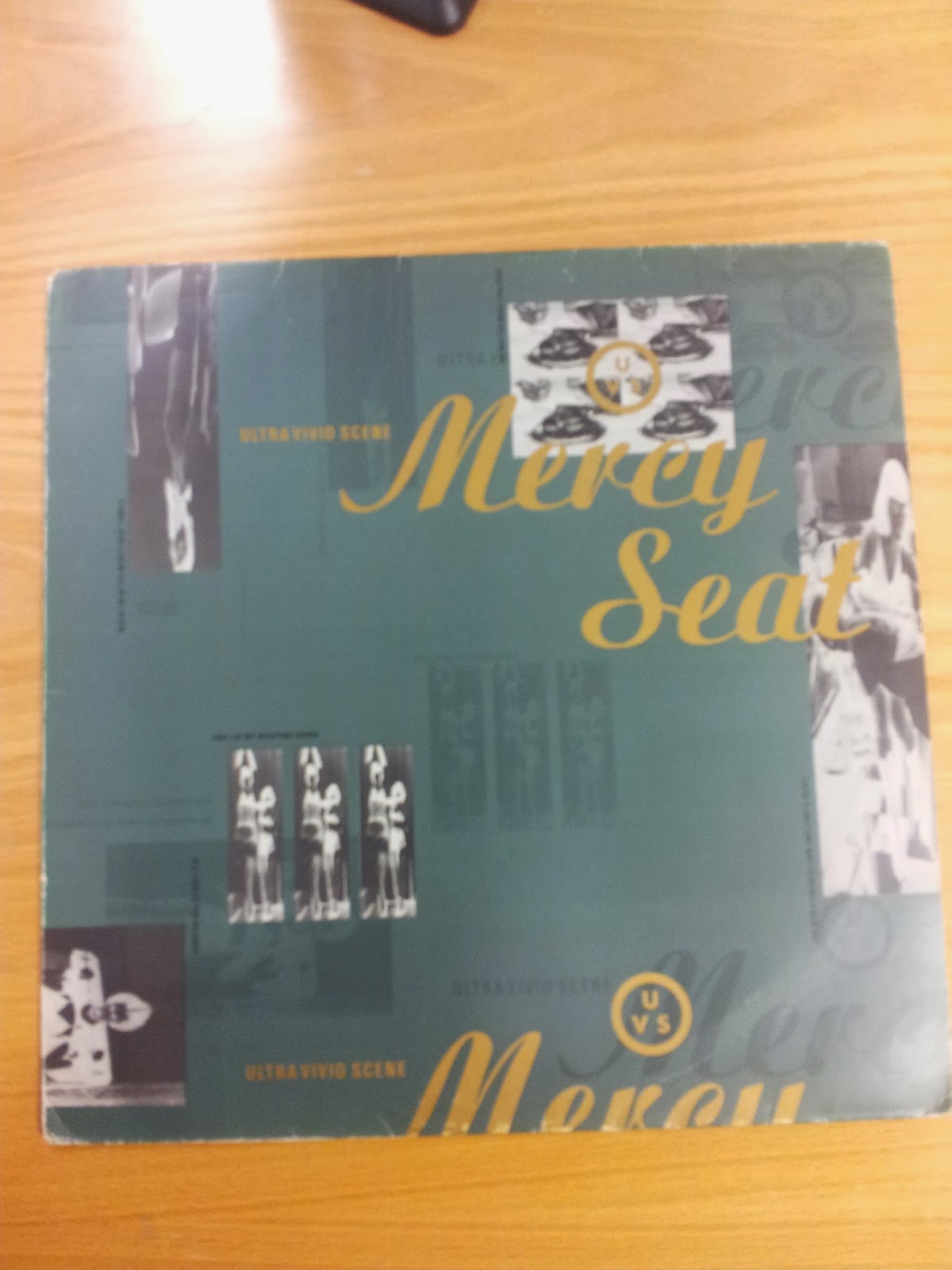 It wasn't green, it was grey, of course. Even my photo of it (above) comes out green. Oh well.
So you would think that my want list would be at the same number, but no, it's gone up by one. Today's count is 929 because of a fellow collector called berndhugo who has recently acquired Birthday Party's Junkyard album on a UK cassette, which many believed didn't exist. Berndhugo was good enough to send me some pictures and I added it to discogs, hence the extra release.

Let us see what tomorrow brings....humph!

Dragged myself into work this morning, still feeling a little spaced out, that's man flu for you, nastiest disease in the world. I actually dropped three from my wish list today, as one release on discogs was added incorrectly and so was deleted, WooHoo

Waiting for at work was the Birthday Party album Junkyard, this time the New Zealand vinyl version and also a test pressing of Wolfgang Press' single King Of Soul. 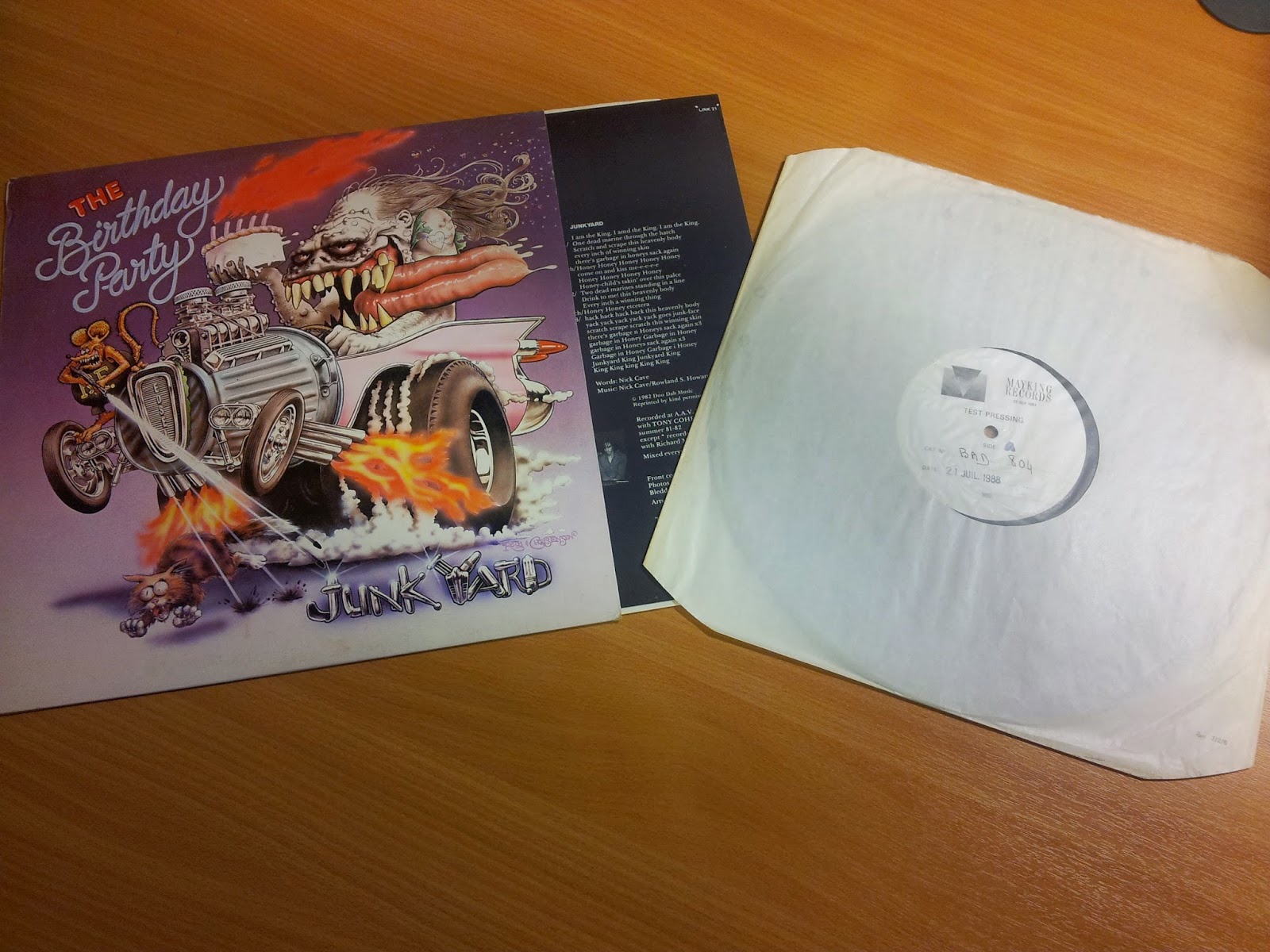 Count is now down to 928. Some more beauties to get to me yet, but the purchases are starting to dry up. I need to find some more releases and pretty quick

In typical fashion, when everything I purchase I have delivered to work, I haven't been into work today because I'm chocked up to the eyeballs with a cold. So no work, no pick up of deliveries and nothing to add to this blog as promised. Fate has a funny sense of humour doesn't it? Chances are, there are deliveries on my desk at work that I can't tell you about yet. Between the running nose, sneezes, coughs headache and sore throat, is a desperation to get back to work. There are some lovely purchases making it's way to me, let's just hope I can shake the sweats and get back to work....watch this space....a bit longer

As promised, I'm here again. Today has been a typical day. I started of with a want list of 928 and although I have had a delivery today...the count now is....931. Today's post revealed a Birthday Party CD of the album Prayers On Fire. 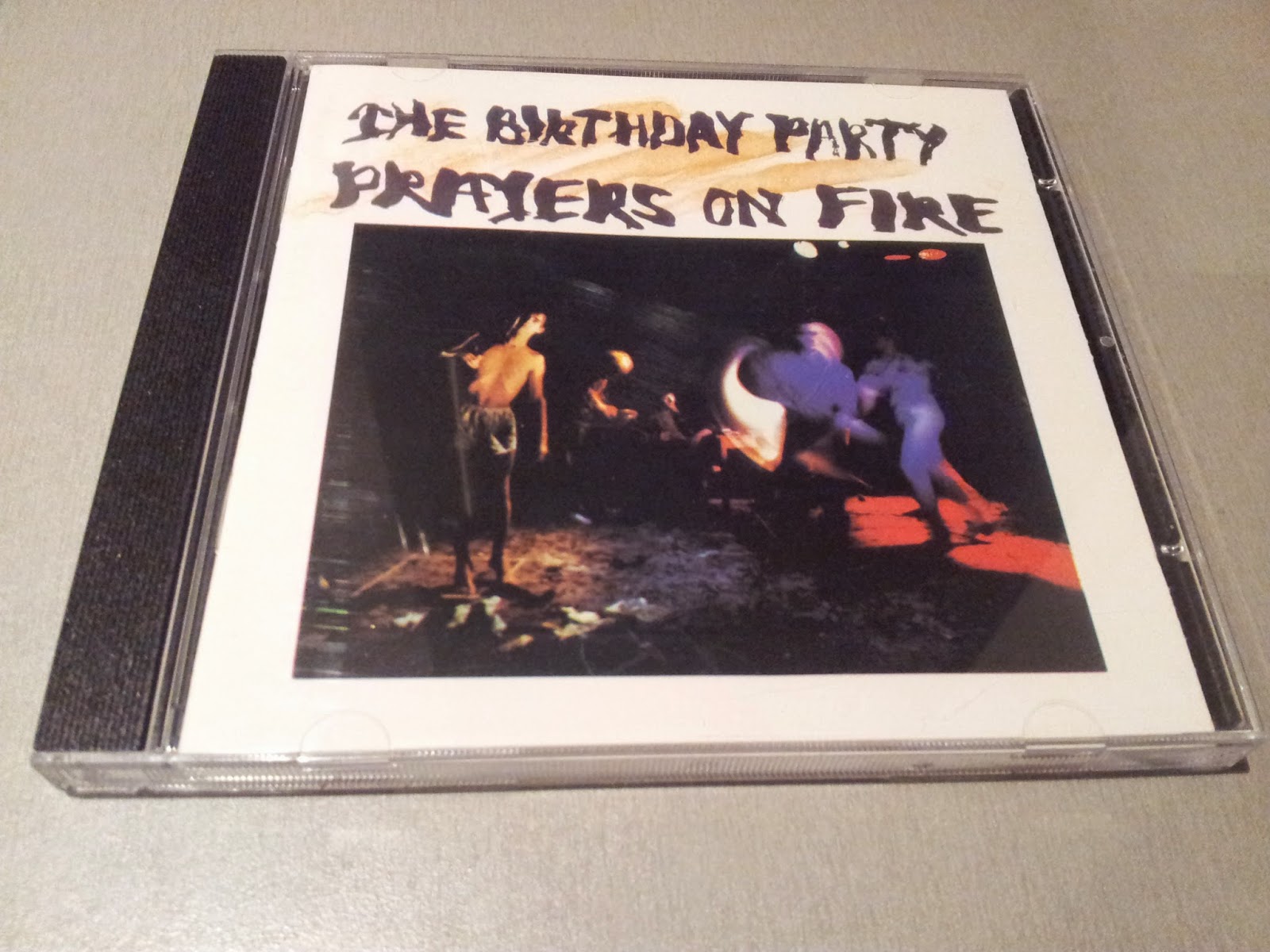 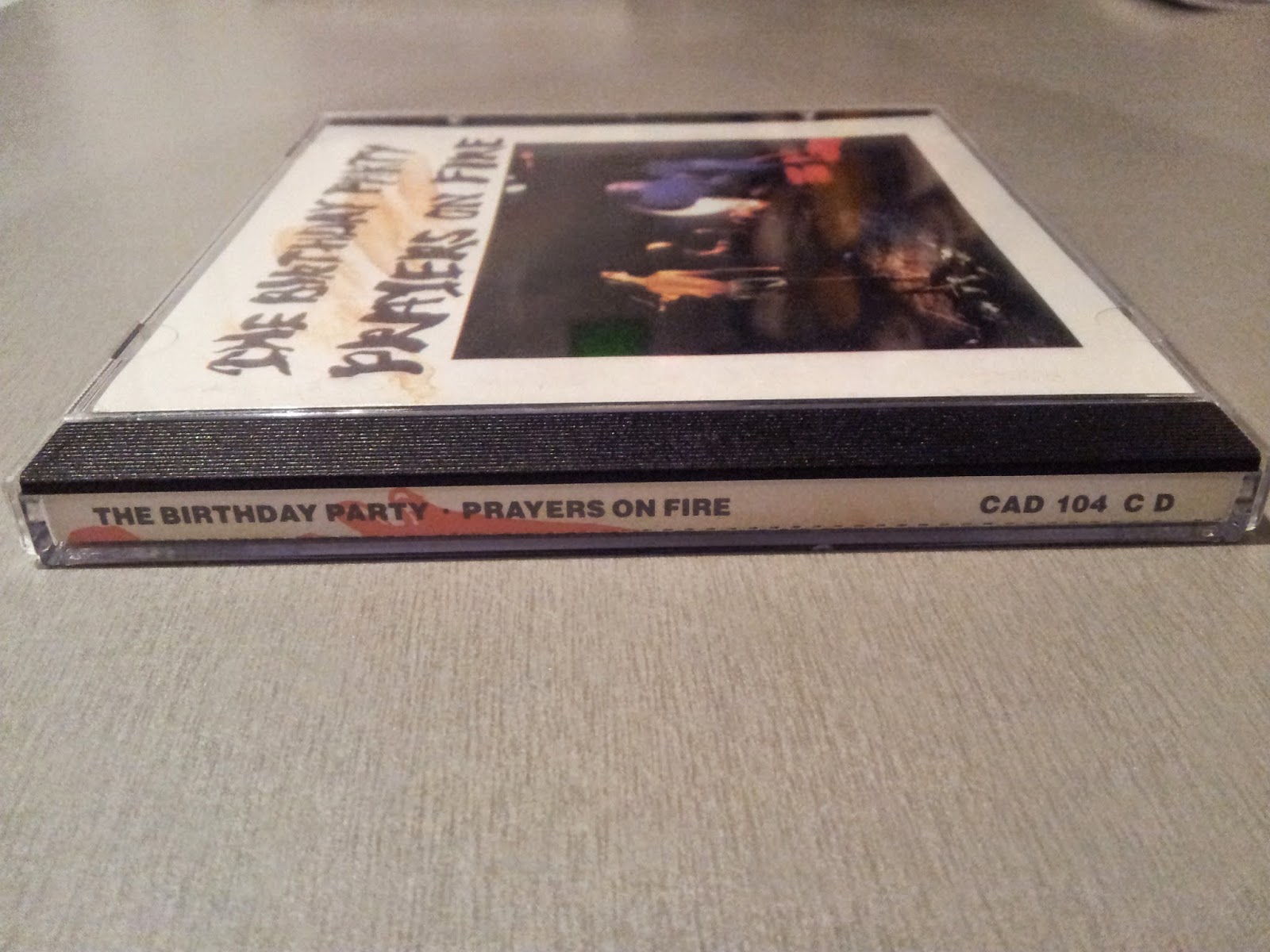 All looked good. It looked like the UK release with the catalogue number CAD 104 CD, bought from ebay. The only give away that it wasn't the original 1988 release, was the matrix number near the centre of the CD itself that has GAD104CD on it. The GAD code was used by 4AD to re-release lots of albums in the 90's with. So any release with a GAD code is not an original. Buyers beware. Darn it! This morning I also found another three items not on my list and I had to reluctantly add them. It almost feels painful to find yet another release that I don't have listed in my wish list. Oh well, lets see what Monday brings
Posted by jonnyhalfhead at 18:43