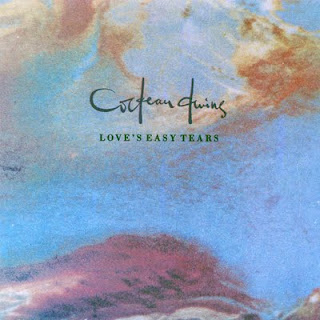 Beautiful artwork that reflects the music really well.  Could it be argued that it isn’t art though?  To some maybe.
I have a problem defining the difference between art and manufacturing.  Ok, two extremes would be the ceiling of the Sistine chapel and a bolt.  But take for instance pottery, my greatest bug.  A mug created at a factory would not be considered a piece of art.  Stick a transfer on the side, is it then a piece of art?  Probably not.  What if the same picture was hand painted?  I still don’t think this is art, but some argue that it is.  What if the mug had two handles on it?  Now many would argue this is art, I still think it’s a mug and it holds tea.
I personally believe that record covers are an art form, some more than others.  4AD were always expressive with their covers, which along with the music, makes collecting them all the more enjoyable.
Whether this expression of art in graphic design holds true for a chair is one where I get a little lost.  Although functionality can be boring it can be alleviated by good design and good design can also help move units, I struggle to see art in the attempt to shift volume.  Maybe the same could be said for 4AD record covers, really they were designed for shifting units weren’t they?  I would like to think not.  I would like to think Vaughan Oliver, Nigel Grierson and V23 had fun messing about, experimenting and expressing themselves and the commercial success was more a lucky bi-product than a primary intention.
Maybe one day I’ll find out……….
Some of this week’s additions
http://www.discogs.com/Cocteau-Twins-Loves-Easy-Tears/release/189894
http://www.discogs.com/Pixies-Bossanova/release/422640
Posted by jonnyhalfhead at 20:52