Record collecting, how long will it last?

I have been getting on with the job of buying in wanted items on the collection. Once again I have been bitten by idiot traders that can't be bothered to list an item properly. This time it was Frazier Chorus and the alternative release of Sloppy Heart re-released on Virgin in an unusual card sleeve, the important bit being the card sleeve, as without the sleeve, the version is then incomplete. As seems to be the typical story, the sleeve by the trader was graded as EX+ which looked positive, only to find on delivery that there was no card sleeve just a plain black die cut sleeve that anyone could have added. One complaint to the trader later was met with the typical indifference and lack of any surprise.

A couple of weeks later I found the same item from a more respectable outlet, let's see what difference that makes.

Over the past month I have noticed a worrying, but so far small, slip in the natural climb of music collection worth. I know that collectors only keep a small eye on what is happening as regards the monetary value of their collection, but what is happening in the market is important. If the market drops and people stop buying, apart from the value going down, traders stop trading and many important pieces of music may well end up in landfill. Ok, so that's an extreme end of the loss of value, but while it may seem good that prices go down for the collector in the short term, a fall in general value of music collections would look bad for the second hand industry and bad for the collectors and material would be a lot harder to find.

I have attempted to keep on eye on the general value trend of the market myself by keeping a spreadsheet of data going by adding to the spreadsheet the market value each day. At the moment I have 2,437 items in my collection, of which only a part is devoted to 4AD. The range of genre's and styles in my collection is pretty varied and so I think this gives a reasonable representation of the variations in the market. What I have done for the past couple of years is take the average selling price of releases sold on Discogs, then got the average of those across my entire collection. I have a couple of rarities and a whole load of stuff worth next to nothing. I think the results have always been quite interesting. As time has passed and more is added to my collection, the more accurate the data becomes as the averages iron out the discrepancies. 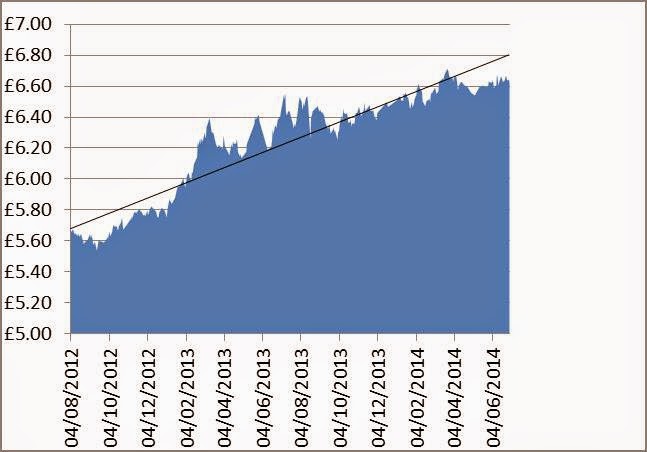 When I started with this data, I was still adding my collection to the database, hence the fall at the very beginning. Over time though I could see why some finance experts were proclaiming music to be the new financial investment like wine and antiques. The first year showed an increase in the average price by 12.5 percent. By April of this year, that trend was looking to be going the same way, as by April 2014 the increase was 6 percent over the half year.

Although all of this is an aside to the joy of collecting and enjoyment of the music, it can be nevertheless mildly fascinating. I have watched and wondered, when Beatles original pressings, Led Zeppelin originals, etc, etc, just keep rocketing in price, will the bubble burst and all of a sudden, no-one will give a rats arse about vinyl. Whilst it wouldn't make any difference to me in terms of my desire to collect, it would have repercussions on my ability to source the pieces I need for my collection.

Adding these figures to the spreadsheet since April 2014, I started to notice a stall against the expected increase. While ups and downs are always expected after a couple of weeks the figures tend to right themselves. But after 3 months of near stagnation, I can't help but wonder if there is a change underway. Or maybe I'm just reading too much into it. Perhaps in the next couple of weeks everything will shoot up and the norm will be established. But it is interesting as to whether the market can carry on getting £4,000 for a Beatles Please Please Me, £1700 for a Led Zeppelin I and still keep an interest for those that want a '60s Cliff Richard single worth only 50 pence.

On a side note, another trend I've tried to keep a record of is the extent of my want list with a hope to seeing a down turn in the number of items still needed to complete my collection. Items are discovered and get added sometimes at the same rate that I'm ticking things off the list. 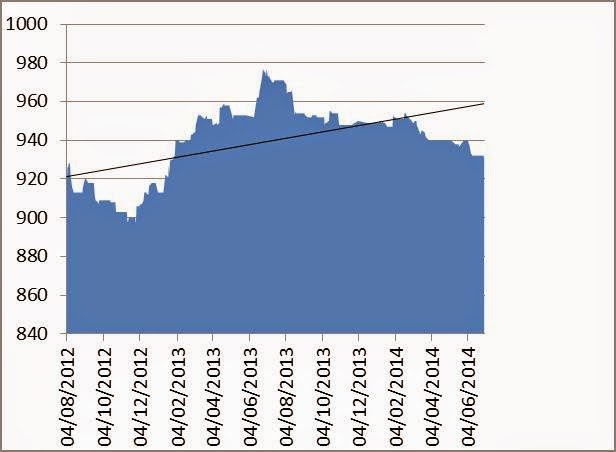 The last time I published this chart I was getting a little frustrated by the fact that the trend was going up rather than decreasing. Nearly for every item I bought I found two others I hadn't previously known about. But at last as you can see above, the trend is going the right way, down. You never know, in a couple of decades I may have this thing wrapped up......hmm,... all kind donations will be gratefully received!!