I am very excited. I have been wanting to let tell you all what I have managed to acquire this week, but didn’t want to chance my luck until the item finally arrived safely and in one piece.

There are many releases that are exciting to acquire when collecting 4AD. Some are quite rare and yet fetch surprisingly low prices. Some are ridiculously priced, not only because they are rare, but also because they are very much sought after.

I remember a 4AD collector being asked what his most prized collection piece was. His answer was the My Captains single “History”. He had been struggling to find this single over a number of years and have never seen it once, not on ebay or at record fairs, nowhere. And yet I never had this problem and found a copy quite easily.

Probably the most expensive piece of 4AD to try and acquire is the “Lonely Is An Eyesore” compilation. This was a 4AD release from 1987. It came in a standard release of either LP, CD, cassette or video. This version of the LP was fantastic enough, with a strange fold out inner sleeve with all the 4AD releases listed so far in 1987, many already deleted. 4AD released a more limited edition of this LP. The limited version had a thick book inside with lots of great artwork and a second sleeve that folded out  like a tryptych. But then 4AD also created 100 copies of a wooden box, which had inside the LP, CD, cassette and video, with individual pieces of artwork created for the box inside. The plan was to give all the contributing artists a copy each, but some of the artists didn’t want their copy. Of the 100 made only about half were taken by individuals in 4AD. The rest then got sold to the general public.

A few years ago I saw one of these go up for sale on ebay for about £400. I didn’t have the money then, and I also found it difficult to justify spending that kind of cash on one music item. A couple of years later another sold for just over £1000, again on ebay. I didn’t even see this one until it had gone. Now if you see one for sale it’s generally going for around the £2000 mark. I have seen one for sale at this price and it becomes hard to try and justify spending that kind of money.

Unfortunately, this is not the item I have acquired as yet.

This is what I have just got my hands on.

This is the debut release from Clan of Xymox. Released in 1983 and self financed, it has quite a story behind it. Getting behind the story though seems full of controversy and ego. Don’t take my word for it, see this great biography on the story of Clan of Xymox here

The reason why Subsequent Pleasures has become so sought after, is because “The Band” decided to destroy most of the 500 copies. Why is the ultimate question! Nevertheless, the few copies that remain fetch a good price and are generally difficult to get hold of for less than £200.

To sweeten the pain, when the item arrived in the post, I was delighted to find inside a set list from a Clan of Xymox gig, with a backstage pass stuck to it and signed by the band members. Finishes it off nicely I think! 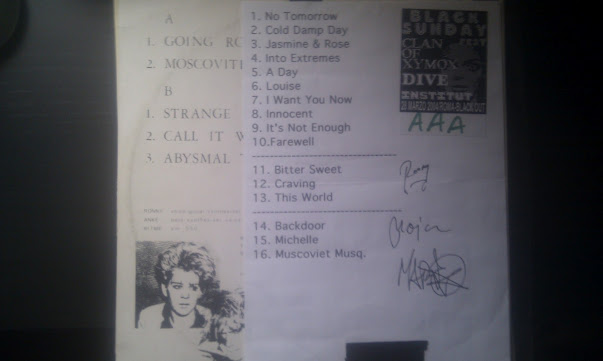 Well at least this is one of the more expensive items on the collection grabbed. I see myself fortunate I didn’t decide to collect Led Zeppelin or something similar, otherwise I would need another mortgage.....
Posted by jonnyhalfhead at 18:39

Email ThisBlogThis!Share to TwitterShare to FacebookShare to Pinterest
Labels: 4AD, Clan of Xymox, Lonely Is An Eyesore, My Captains